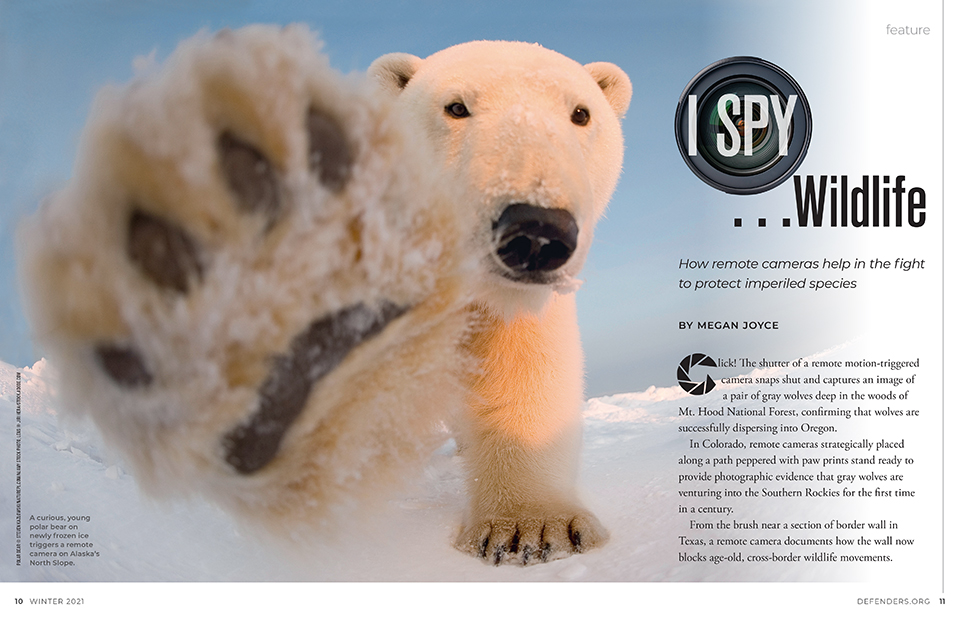 Click! The shutter of a remote motion-triggered camera snaps shut and captures an image of a pair of gray wolves deep in the woods of Mt. Hood National Forest, confirming that wolves are successfully dispersing into Oregon.

From the brush near a section of border wall in Texas, a remote camera documents how the wall now blocks age-old, cross-border wildlife movements.

If a picture’s worth a thousand words, then the images captured by remote motion-sensor cameras triggered by wildlife movement are providing a wealth of critical information at a time with so many species at risk. This includes baseline population data and subsequent changes in the face of climate change, habitat destruction and biodiversity loss. The cameras also help researchers collect information about day-to-day activities and behaviors of elusive species that live in areas where in-person observations are difficult.

Within a few months of setting up the cameras along trails, watering holes or suspected wildlife movement corridors, scientists, wildlife conservationists and trained volunteers can gain a good sense of which large and medium-sized animals use the area. The data collected can answer questions like what species depend on a particular wildlife refuge, how many wolves make up a particular pack, what pathways do pronghorn travel and are Florida panthers using a newly installed highway underpass.

“This kind of information helps us shape state and federal wildlife protection policies and programs to make the case for funding and protecting habitat on public lands, establishing and maintaining wildlife movement corridors between breeding populations and fighting to prevent development of habitat that we know a species needs to survive,” says Sristi Kamal, a Defenders senior Northwest representative who helped set up the cameras in Mt. Hood.

Collecting data this way is relatively inexpensive—a camera costs between $200 and $400—and relatively easy, depending on the terrain and the distance traveled to retrieve the memory card and change the batteries.

Best of all, it causes minimal disturbance to wildlife—no chasing, sedating, radio collaring or otherwise harassing. Animals barely notice the sound of the shutter or the flash.

Photos and video footage from remote cameras have also provided plenty of reasons to celebrate—like in 2016 when cameras documented a female Florida panther north of the Caloosahatchee River for the first time in more than 40 years. The endangered cats have long struggled to increase their numbers and expand their range amid rapidly increasing human population growth and development. Remote cameras later documented that she produced several litters of kittens, that other females have since made it across the river and that males readily find them, as evidenced by remote video footage capturing a pair of panthers exhibiting mating behavior.

When wildlife managers in Oregon officially recognized the state’s first breeding pair of gray wolves in 2009, they used radio telemetry and a helicopter to locate and video record the female. (She became the mother of OR-7, the famed trailblazer that meandered between Oregon and California before finding a mate.) But biologists weren’t sure if wolves in eastern Oregon could traverse highways, navigate past human settlements and cross rugged landscapes to claim territory in the North Cascades until an Oregon Department of Fish and Wildlife camera placed in Mt. Hood National Forest captured a wolf pair in 2018.

Last June, a camera brought more good news near Laguna Atascosa National Wildlife Refuge in Texas when it caught a male ocelot using a highway underpass. “Road strikes are the leading cause of death for ocelots in South Texas, so news that the cats used these road crossings that were specially designed for them have renewed hope for their long-term conservation,” says Sharon Wilcox, Defenders’ Texas representative. Only 60 to 80 ocelots remain in the U.S. and only 15 or 16 live on Laguna Atascosa.

Remote cameras also enable people from all walks of life to participate in community-based science projects alongside researchers who appreciate the help. For example, volunteers in the Northern Rockies—where Defenders leads a group called “Wolverine Watchers”—and the Pacific Northwest, share some of the responsibility for trekking into the backcountry to set up and collect camera data. “Without it, scientists might know even less about rare and secretive species like wolverines, fishers and lynx,” says Zoe Hanley, a Defenders senior Northwest representative. “When we know more about where these species live and how they behave, we can help land managers and policymakers make more informed decisions about how to protect them.”

Defenders also puts remote cameras to use in the Mexican gray wolf recovery program in New Mexico, where interns set up camera traps on national forest lands in wolf territory. The photos help determine where to set up nonlethal deterrents like electrified fences and fladry—fencing with red flags that keep wolves from venturing near livestock—or where to have range riders focus their attention to keep wolves and livestock safe.

There’s no doubt that camera traps have revolutionized wildlife research and the ability of conservationists to advocate for wildlife protections. Sometimes, though, camera traps just bring joy to those curious enough to catch some candid wild moments in their own backyards.

That’s true for Larry Grayer and his daughter Samantha. When the pandemic hit, he started working from his Great Falls, Virginia, home and his 14-year-old daughter’s school went virtual. The father-daughter duo had always bonded over hearing owls and glimpsing wildlife in their backyard. With more time at home, they decided to get a closer look. After setting up a remote camera overlooking a stream, they have been spying on their wild neighbors—foxes, minks, river otters, herons, hawks and more—ever since, their connection to nature and to each other deepening with each new image.

Megan Joyce is a digital content associate at Defenders of Wildlife.

A triggered system with flash captures a wolverine in the Bitterroot Mountains. “This setup requires a ton of tinkering and customization to make it work together and make it waterproof enough to leave it out in the rain and snow,” says photographer Robin Carleton, who worked with Defenders to select a good spot. “It’s a bit nerve-racking to leave it out in the woods but that’s all part of the game.”

When horseshoe crabs come ashore to spawn each spring at Cape Romain National Wildlife Refuge in South Carolina, thousands of shorebirds anticipate their arrival to feast on their eggs.