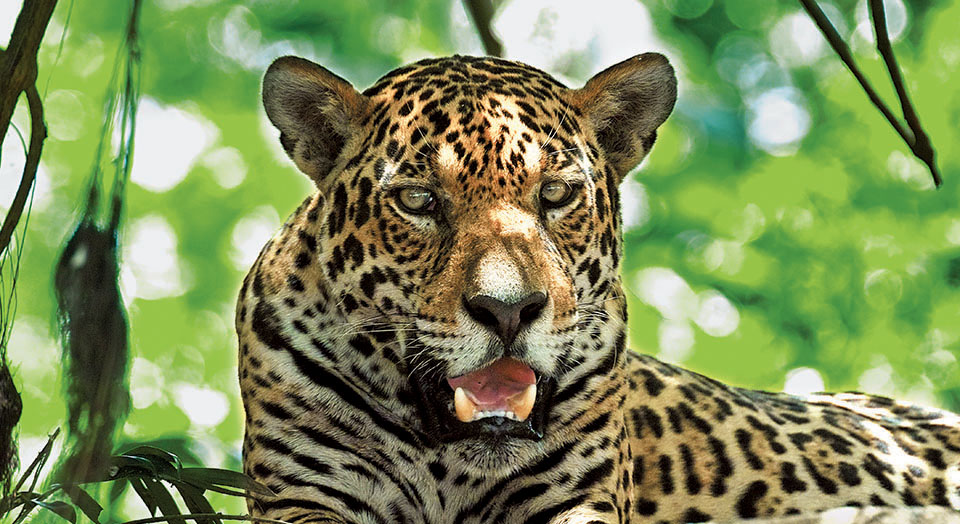 With muscular shoulders and forearms and powerful jaws, the jaguar is no pussycat. These fierce felines can even crunch through turtle shells and the leathery armor of armadillos and crocodiles.

Unlike their big cat cousins on the African savannah, jaguars prefer dense forest, where their padded paws allow them to stalk and pounce in silence. They are also skilled swimmers.

But the largest feline in the Americas—third largest on the planet after the lion and tiger—does show a delicate side. The beautiful rosette spots on their fur are unique to each individual just like our fingerprints. This luxurious coat has also made jaguars vulnerable to hunters. At the height of their decline in the 1960s and 1970s, more than 15,000 jaguars were killed each year for fashion—roughly the number alive in the wild today. Consumer awareness campaigns largely stopped the trade, although the endangered cat still faces pressure from poachers, ranchers and habitat loss.

Today this endangered cat hangs on in remote regions of Central America and South America—particularly in the Amazon. Every few years a solitary cat’s image is caught on a hidden camera in the American Southwest—historically the species northernmost range. With 30 percent of the land in Arizona still suitable for jaguars, if we protect habitat and allow for safe passage on both sides of the border, this mighty and magnificent cat could stage a comeback. It remains up to us—their only rival in the wild.

To help jaguars, Defenders has joined Naturalia, one of Mexico’s leading conservation organizations, and the Northern Jaguar Project in establishing a protected reserve for jaguars in Sonora, Mexico. More than 55,000 acres of key jaguar habitat is now protected. Defenders is also advocating for the U.S. Fish and Wildlife Service to work toward a stronger recovery plan to increase the range available to the species. Only through a combination of protected areas and community awareness will the jaguar survive.