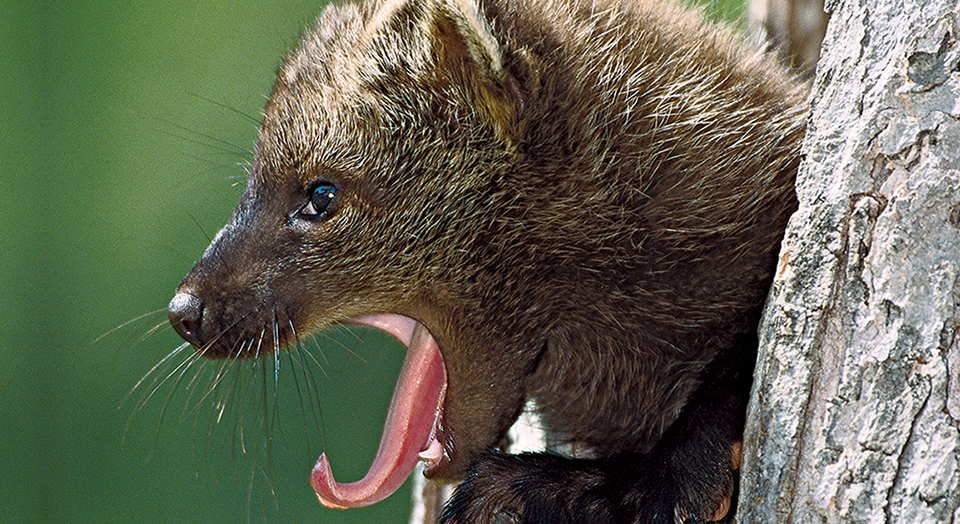 In a blur of brown fur, the fisher dashed into the trees of Gifford Pinchot National Forest in Washington state. Five more fishers quickly followed, and Defenders’ Elizabeth Ruther joined in the collective cheer.

Ruther and other conservation colleagues were on hand in December to help the Washington Department of Fish and Wildlife reintroduce this rare, mid-size member of the weasel family to an ecosystem where it’s been missing for decades.

Fishers historically lived throughout most of North America’s northern forests, but like many furbearers in the late 1800s and early 1900s, they fell victim to trappers who marketed their fur. Later, loggers and land developers further strained the population. By mid-century, fishers had disappeared from Washington, and in the 1990s—after extensive surveys—biologists officially declared them locally extinct.

While fisher populations have since rebounded on the East Coast and in the Midwest, fishers in the West have struggled to regain a foothold.

“Today some of the best habitat left in Washington is on our public lands—in national parks and national forests—so that is where we are focusing our efforts,” says Ruther, Defenders’ Northwest representative.

In 2008, the first phase of reintroductions began in Olympic National Park. Additional releases are planned for Mount Rainier National Park over the next two years and for North Cascades National Park in the next three.

“It’s an ambitious plan and we’ve got a lot of work to do, including continuing to talk to residents and wildlife agencies about the importance of preserving specific habitat elements, like snags, within forest ecosystems for wildlife,” says Ruther.

Meanwhile, fishers in the Northern Rockies are fairing far worse. Considered locally extinct by the mid-1900s, they now exist in low numbers in Idaho and western Montana after reintroductions last century. Despite a struggling population, fishers are still legally trapped in Montana. And while trapping fishers in Idaho is not legal, the accidental trapping of fishers in marten and bobcat traps has dramatically risen over the last five years, as market prices for pelts increase.

But in January, the U.S. Fish and Wildlife Service (FWS) announced it will consider whether the Northern Rockies population should be protected under the Endangered Species Act.

Defenders petitioned FWS to list this population in 2009 and again in 2013 and is also assisting with monitoring efforts—using remote wildlife cameras and the help of volunteers—to better understand where fishers live in Montana.

“The protections and conservation strategies provided by an endangered species listing could turn the tide for fishers in the Rockies,” says Kylie Paul, Defenders’ Rockies and Plains representative. “The population can’t afford to wait any longer.”