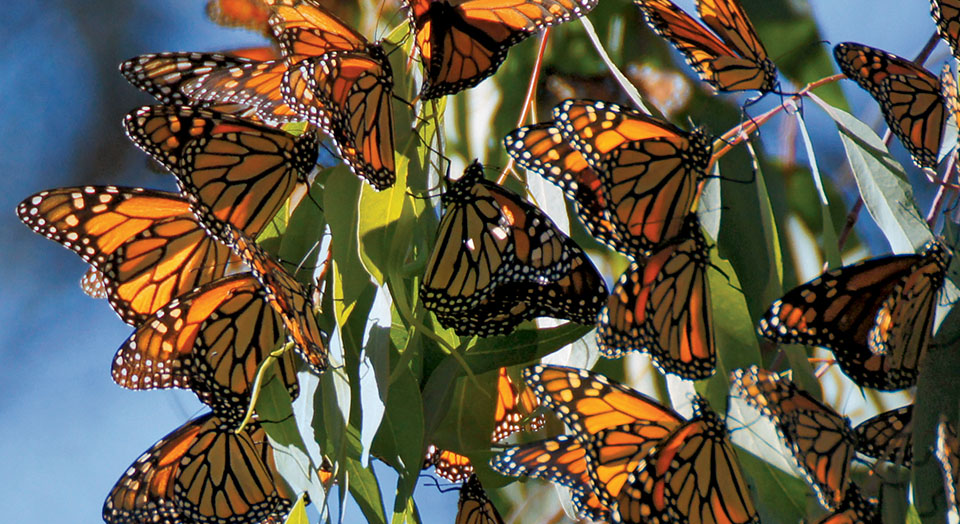 Beloved for their beauty, monarch butterflies make a spectacular multigenerational 3,000-mile journey to Mexico every year when cooler weather signals the winter to come. But habitat loss from agriculture and urban development along their way are putting these majestic migrators at risk.

The North American monarch population has plummeted in recent years, from 1 billion in 1996 to 35 million today.

Monarchs are temperature-sensitive, making them vulnerable to climate change and weather fluctuations. With the decline in numbers, scientists worry that should a winter storm—like the one in Mexico in 2002 that killed up to 500 million (75 percent of the population)—happen again, there might not be enough survivors to reestablish a spring population.

You can help monarchs by planting native milkweeds in your yard. Ask your local garden center for “butterfly,” “swamp,” “common,” “purple,” “poke” and “whorled” milkweeds, and make sure they have not been treated with pesticides.

Fingers had pointed to deforestation of their winter habitat as one of the biggest problems, but Mexican officials have now virtually eliminated illegal logging, according to the U.S. Fish and Wildlife Service. Even so, the last two winters scientists recorded the lowest number of monarchs there since annual surveys began 20 years ago. Clusters of monarchs covered 45 acres of their Mexican wintering grounds in 1996, but now their clusters make up less than two acres.

Monarch numbers have dropped in tandem with rising use of glyphosate, an herbicide introduced in 1997 that kills plants without a genetically engineered immunity. This includes milkweed, the only food a monarch caterpillar eats. “Milkweed is a casualty of our choice to plant monoculture crops,” says Ya-Wei Li, Defenders’ senior director of endangered species conservation. He is working with Iowa State University to advise state agencies and other stakeholders on the best way to set up land conservation plans in Iowa, the heart of the butterfly’s breeding range, and other Corn Belt states.

“The continued use of herbicides on milkweed reduces the habitat for monarchs,” Li says. “But if Monsanto had never invented Roundup, there would’ve been something else thought up to eliminate monarch habitat so we could get as much corn and soybeans as possible.”

He says that now the objective is to find solutions before it’s too late. “The farmers will still be there,” he says. “Defenders’ goal is to get the most conservation out of these places—to provide incentives for landowners and states to want to plant milkweed in migration corridors.”

A growing number of campaigns aim to do just that, including an initiative launched by President Obama last year aimed at seeding habitat along the Interstate Highway 35 “monarch flyway” from Texas to Minnesota.

Other important tactics include urging local and state governments to stop spraying and mowing along roadways and encouraging everyone to do their part by planting their own backyard butterfly buffet of native flowering plants.

Native is the key word. A recent study published in the journal Proceedings of the Royal Society B found that plantings of non-native tropical milkweed in the South are causing monarchs to suffer higher rates of disease and parasitic infection. Tropical milkweed, unfortunately the species most commonly offered at nurseries, doesn’t die back like native milkweed. A waning food source signals the butterflies to move on for winter. When they don’t, scientists say, they do not experience “migratory escape” or “migratory culling” and infectious diseases can spread.

“The bottom line is that while we are proceeding with a sense of urgency, we also will use and develop sound scientific understanding to guide the development of cost-effective, productive monarch habitat,” says Sue Blodgett, chair of the Department of Entomology at Iowa State.

This leaves Li cautiously optimistic. “Some states are at the forefront—motivated and proactive—but we really need other states to step up.”