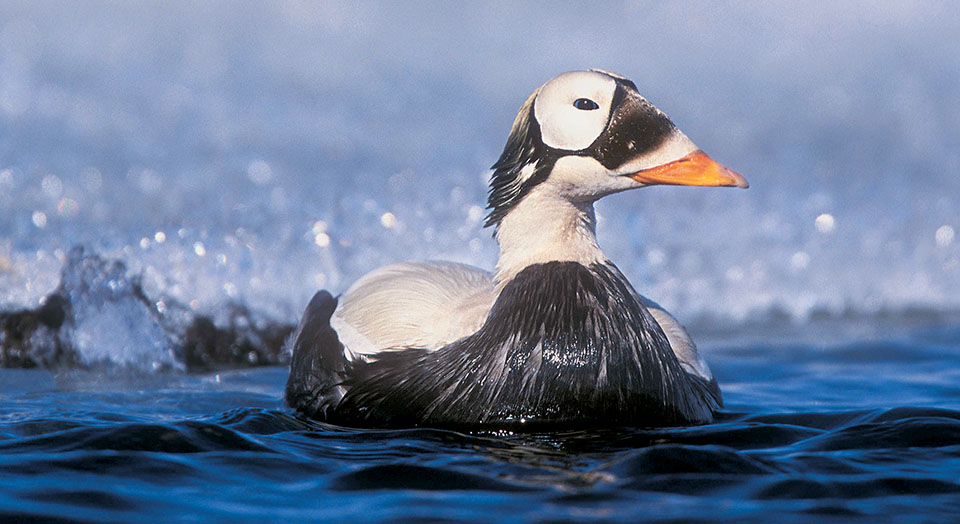 With a soft green cap reminiscent of an aviator’s helmet and googles, the spectacled eider spends much of the year in places so remote that researchers only discovered its wintering grounds in 1999—with the help of space-age satellite tracking.

During the coldest months, the world’s entire spectacled eider population congregates to feed in a dark, mostly ice-covered area in the Bering Sea southwest of Alaska’s St. Lawrence Island. An abundance of nutrients—flushed from Alaska’s great rivers and carried here on sea currents—nourish clams and other creatures throughout the year. When the winter winds blow gaps in the drifting sea ice, the eiders arrive to dive 120 to 300 feet below the surface to pluck shellfish off the sea floor.

But climate change is upsetting this delicate balance. Protected as threatened under the Endangered Species Act in 1993 after lead poisoning had decimated its numbers, this diving duck is now facing a winter food shortage. As warmer winters thin ice and cause it to retreat earlier, the water temperature near the sea floor also rises, allowing fish that historically avoided these colder waters to move north to feed, making a dent in the available food supply before the eiders even arrive. Climate change also threatens to dry up the small ponds and wetlands that dot the Arctic coastal plain on Alaska’s north slope, where breeding and nesting birds feast on aquatic insects.

Unless we act to curb climate change and protect this dapper duck’s habitat, the spectacled eider might not see a promising future—despite those distinctive eye frames.

Defenders advocates for the reduction of greenhouse gas emissions to reduce the effects of climate change both in the Arctic and worldwide. Reducing other pressures also allows species, like the spectacled eider, to better adapt to the changes already occurring.

The U.S. Fish and Wildlife Service banned lead shot in waterfowl hunting in 1991. Lead poisons ducks—and other animals—when it is accidentally ingested while feeding. But on the eider’s Alaskan breeding grounds, this ban is hard to enforce.

Defenders advocates for continued public education on the harm caused by lead shot and also advocates for curtailed shipping and fishing traffic in areas where an oil spill or other human-caused catastrophe would devastate the species.