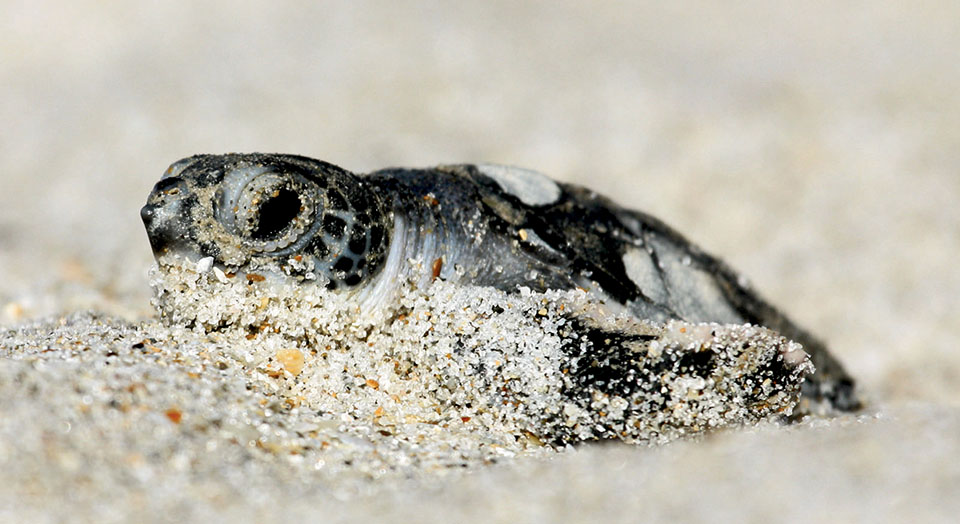 Scuttling seaward, a tiny green sea turtle emerges from its underground nest in the sands of Archie Carr National Wildlife Refuge in Florida. In the 1980s, a hatchling like this would have dug itself out from one of a mere 50 nests on this 15-mile stretch of beach. But a proactive approach toward conservation over the decades has resulted in a record number of nests this year.

“This is really a comeback story,” says University of Central Florida assistant professor Kate Mansfield, who leads the Marine Turtle Research Group. This student and scientist team monitors turtle counts on the beach during turtle nesting season from May 1 to Oct. 31 each year. “It reflects a ‘perfect storm’ of conservation successes—from the establishment of the Archie Carr, to implementing the Endangered Species Act, among many other conservation initiatives,” she says.

All five species of sea turtles that nest in the United States—green, Kemp’s ridley, hawksbill, leatherback and loggerhead—have suffered under the heavy hand of humans. And they’re under attack by land and by sea from habitat loss and development, oil spills, light pollution and entanglement in fishing nets and marine debris. Climate change is also throwing the sex ratio of males to females out of whack. The temperature of the sand where sea turtles bury their eggs determines the sex of the hatchling. Warmer temperatures produce females, which could affect future breeding potential.

With the fishing industry, sea turtles face a gauntlet of hooks and nets. Trawlers meant for harvesting shrimp unintentionally trap sea turtles, which can’t escape to the surface to find air. Baited longlines also attract sea turtles, which can get hooked and drown. Fishing regulations and turtle excluder devices (TEDs) designed to allow sea turtles to escape have boosted recovery efforts—although the use of TEDs is not uniformly required across the Gulf.

While it looks like sea turtle conservation efforts are paying off, it is still too early to call it a victory. Only about one in every 1,000 hatchlings lives to adulthood.

“Hearing that greens are nesting in record numbers is phenomenal,” says Don Barry, Defenders’ senior vice president for conservation programs. “We are excited to see that our efforts are making a difference, but there is still a lot we need to do before all sea turtle species are recovered.”

Defenders advocates for increased law enforcement of existing trawling regulations, the closing of sensitive areas to shrimp trawling, the broader use of escape hatches or other devices to keep turtles from drowning in trawling gear, and the protection of nesting beaches. “Sea turtles face challenges from the moment they’re born, so protections are crucial,” says Fleming.