Harnessing the sun’s rays in the sunny California desert will go a long way toward combating climate change. But the desert is far from desolate, and large-scale, industrial-size solar fields require vast tracts of land that can disturb and even displace wildlife. 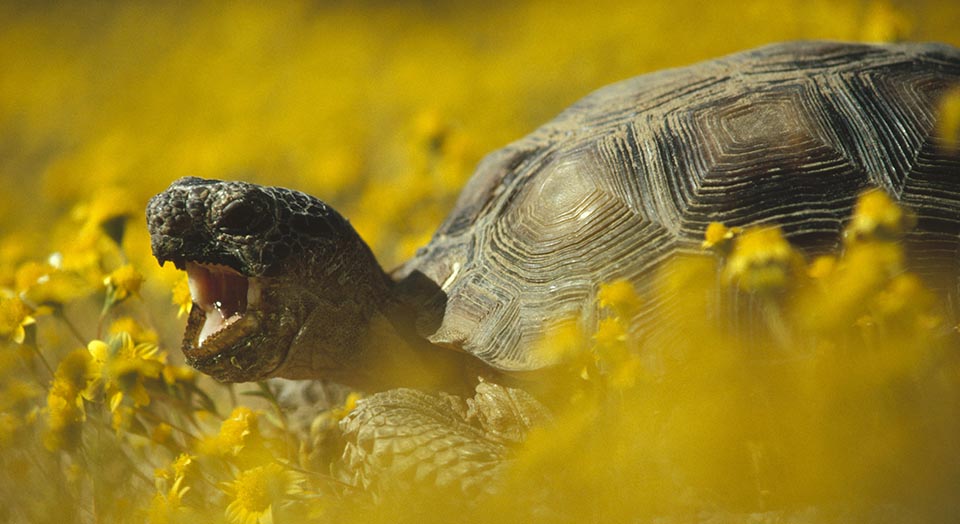 Ensuring this habitat is protected is particularly important for already imperiled species like the threatened desert tortoise. It’s one of the reasons Defenders and other conservation groups collaborated with the state of California and the federal government to target the areas best suited for renewable-energy development across 22.5 million acres of public and private land in the Mojave and Sonoran deserts of southern California.

In September, the Bureau of Land Management finalized the plan’s first phase, identifying areas for development on federal lands. During the years-long process, Defenders succeeded in getting the Obama administration to adopt upfront “smart-from-the-start” principles for planning, designing and managing renewable energy projects that avoid or minimize the impact to desert tortoises, bighorn sheep, golden eagles and Mojave ground squirrels.

Some solar projects can sprawl over 8,000 acres or more. If located in sensitive habitats, their sheer size can result in significant habitat loss and fragmentation. This can make it difficult for wildlife to find food, water, shelter, mates and protection from predators. Fragmented habitat can also lead to smaller, isolated populations of wildlife, making long-term survival more difficult.

In the plan’s next phase, federal and state agencies will work with six desert counties to target degraded private lands for renewable-energy development, along with recognizing areas for future conservation.

“Identifying these lands is essential to meeting climate objectives for California and for the nation,” says Kim Delfino, Defenders’ California program director.

In 2006, California enacted the Global Warming Solutions Act of 2006, the most far-reaching climate bill in the country. The law calls for the state to reduce greenhouse gas emissions to 1990 levels by 2020. In 2011, the state of California enacted a requirement that one-third of California’s electricity should come from renewable sources by the end of 2020. This renewable-energy standard was extended in 2015 to 50 percent by 2030.

“Add in the Obama administration’s pledge to reduce national greenhouse gas emissions in the range of 17 percent below 2005 levels by 2020, and we are establishing a balanced approach to renewable-energy development,” says Delfino. “This plan is a blueprint for other states, the nation and the world to consider as we all work together to fight climate change and race against extinction.”