Species suffering at the hands of the wildlife trade will receive increased protections thanks to the efforts of Defenders and other conservation advocates from around the world who met in Johannesburg at the Conference of the Parties to the Convention on International Trade in Endangered Species (CITES) in September. 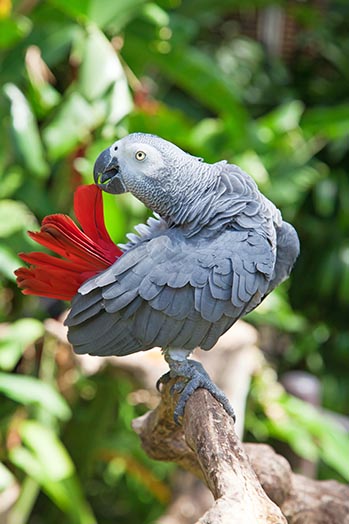 The global black market trade in live animals and parts is the fourth largest in the world, generating an estimated $20 billion a year in profits. International crime rings and poachers collect, capture or kill hundreds of millions of wild plants and animals annually. Live animals are often shipped under abysmal conditions, sometimes stuffed into plastic bottles, drugged and duct-taped to a trafficker’s body or loaded into suitcases. Up to 90 percent die in transit.

CITES is one of the ways the conservation community works to combat wildlife trafficking. A CITES listing bans or regulates cross-border sales of species in 182 nations and the EU, preventing poachers from trading.

Defenders’ international team successfully lobbied to prohibit commercial trade of the African grey parrot (above) and the Titicaca water frog and for controls to ensure the sustainable trade and harvest of several species of amphibians, arboreal lizards, sharks, rays and the rosewood tree.

For the African grey parrot—a highly intelligent bird and popular pet—protection could not come a minute too soon. “During the past 25 years, more than 1.5 million wild African greys have been taken from their native habitats, making them one of the most traded of all CITES-listed parrots,” according to a U.S. Fish and Wildlife Service statement.

“Tens of thousands of these birds are captured and exported for the pet trade every year, and tens of thousands more die during attempts to capture, export and sell them,” says Juan Carlos Cantu, Defenders’ Mexico program manager. “Many of us saw the proposal to protect the African grey as the last, best chance to keep the species from extinction. Now all international trade will be prohibited—a fantastic step forward for these beleaguered birds.”

Also harmed by the pet trade are arboreal alligator lizards—rare, tree-dwelling lizards of the cloud forests in Mexico and Central America. Some can fetch up to $2,000 each in the U.S. pet market. This illegal trade, combined with habitat loss, has taken its toll. “Some of these lizards have such low population numbers that illegal international trade could wipe them out in just a few years,” says Cantu. “Thankfully, the proposals that we helped Mexico and Guatemala put forward to better protect these species succeeded and all 29 species in Mexico are now listed under Appendix II, and five species from Guatemala were given the extra protection of listing under Appendix I. We’ll be continuing to work with Mexico to gather support for more species to be moved to Appendix I.”

Defenders further worked to ensure the Titicaca water frog landed full CITES protection and three other amphibians—five frog species and a newt—are now protected under Appendix II. These amphibians are in serious trouble because of exploitation from the pet, food and medicine trade.

Some shark species also won big protections. “Building consensus among delegates to regulate the shark trade is a great challenge,” says Alexandra Goyenechea, Defenders’ senior international counsel for conservation programs. “But we worked hard to gather support for a few this year.” This includes placing all three thresher shark species under international regulations.

Bigeye threshers are coveted for their fins, while common threshers are killed for their meat. Shark skin, oil, cartilage and teeth are also found in the international market. Because it can be hard to tell species apart—particularly once they are processed into fins or meat—Defenders pushed for protection of all thresher sharks.

The silky shark is another species in jeopardy from global trade—with up to 1.5 million fins bought and sold each year from this species alone. “We are thrilled that the proposal to protect silky sharks under Appendix II passed with an unprecedented show of support for our finned friends,” says Goyenechea.

Defenders also helped to unite countries in support of strict trade limits on nine devil ray species. Killed by the thousands for their gill plates, which they use to filter food from the water, devil rays have drastically dropped in number as the amount of gill plates on the market has tripled in just three years.

Defenders also worked with nations to adopt stricter trade protections for rosewood trees, a tropical hardwood used for furniture coveted by China’s newly rich. Illegal exports of rosewood have skyrocketed in a decade, decimating forest habitats. Several countries have enacted complete bans on logging and export of rosewood trees to protect their forests, but it hasn’t always worked. Belize lost up to 90 percent of one rosewood species in just a few years. In Cambodia, mostly illegal logging has driven the trees to near extinction, forcing illegal loggers to look for timber in Thailand.

“We are very happy to say that more than 300 species of rosewood trees, living in more than 100 countries worldwide, are today that much safer from the demands of unregulated trade,” says Cantu.