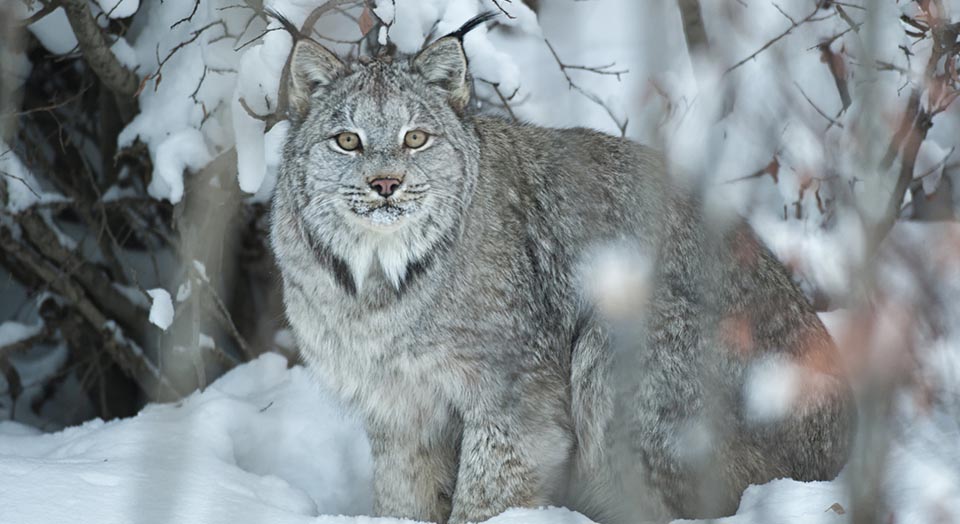 Super heroes use their superpowers to save the day. Canada lynx need their amazing abilities just to get through it. Their characteristic black ear tufts enhance already superb feline hearing, and their hypnotic yellow eyes help them spot prey more than 250 feet away.

While adults are about twice the size of the average house cat, lynx behave in similar ways. They travel alone and stalk prey—almost exclusively snowshoe hares—in the snow before pouncing with their oversize paws, which act like built in snowshoes.

Making their home across much of Canada and into parts of Alaska and northeastern, northwestern and Rocky Mountain U.S. states, these majestic cats are extremely susceptible to climate change. They depend heavily on dense snow to hunt, and with rising temperatures in North America early snowmelt is becoming more common each year. Climate change isn’t the only threat. Logging, development, oil drilling and mining all pose harm.

Since these fascinating felines cannot be their own heroes, we must step up and act to address climate change, to protect critical habitat in states like Colorado and New Mexico where the lynx is making a recovery, and to stop habitat destruction on our public lands. –Rebecca Bullis

Canada lynx were officially protected as threatened under the Endangered Species Act in 2000, in response to Defenders’ petition and litigation. But there is still a long way to go to protect their habitat and help them recover throughout their range. The U.S. Fish and Wildlife Service has yet to develop and implement a recovery plan.

Also a great deal remains unknown about lynx population status, responses to threats and habitat needs, which can only be understood through careful field research and monitoring. Simply keeping track of these elusive, solitary animals in areas where they still survive is challenging.

Meanwhile, Defenders is keeping an eye on proposed plans and projects on our national forests that contain lynx habitat to ensure that the needs of lynx are considered and included.