Defending Wildlife Across the Rocky Mountains and Great Plains: A 2020 Recap

Describing 2020 as a difficult year is quite an understatement. It took a heavy toll on all of us. Some have been harmed far more than others by COVID-19, racial injustice and harmful government policies. Under this shadow, writing a 2020 recap feels complicated, but also important because our collective work to fight against our planet’s ongoing human-caused extinction crisis remains critical for humans and wildlife alike. Here are some of the Rockies and Plains program’s most notable wildlife successes – and a couple losses – in 2020.

Defenders’ Rockies and Plains program focuses on restoring and protecting the most imperiled wildlife of North America’s Rocky Mountains and Great Plains regions, and this includes helping people coexist with them. Due to COVID-19, our seven staff members have worked from home in Colorado, Montana and Wyoming since March, with some exceptions over the summer for field work under strict social distancing requirements. Adapting to this new reality, we still managed to help complete 98 human-wildlife coexistence projects across the region in 2020! Each project directly saves wildlife by keeping them out of conflict with humans and increases human acceptance for sharing the landscape with wildlife. Our projects focused on coexisting with grizzly bears, wolves, beaver and Yellowstone bison, but they also helped protect many other species. 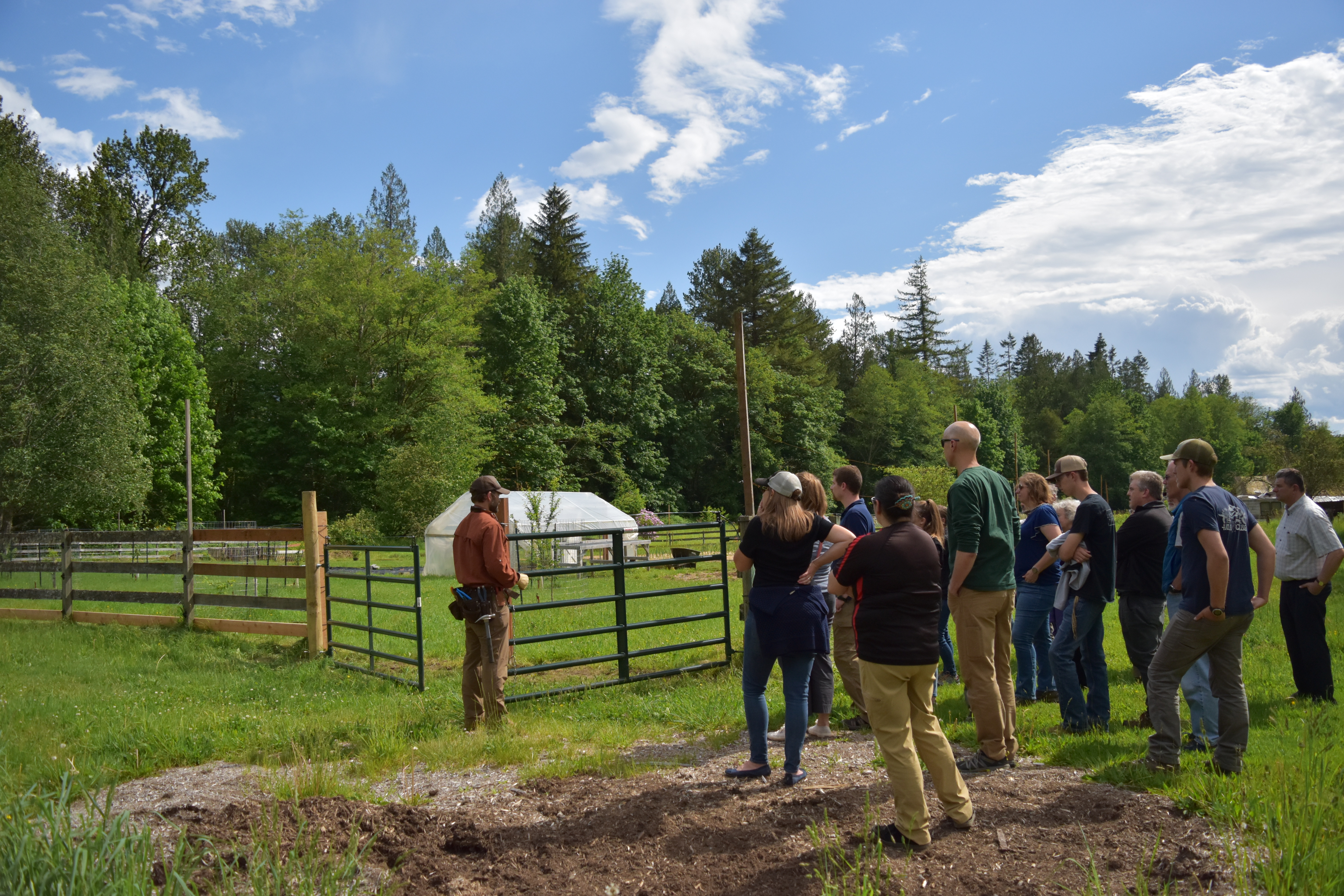 One of our most successful coexistence programs helps landowners in grizzly bear habitat build electric fences around attractants, such as chicken coops, fruit orchards or beehives. In 2020, we provided financial, technical and/or physical assistance to 74 landowners to complete fencing projects that keep grizzly bears away from attractants, bringing our 11-year total to 466 landowner-led projects.

Other coexistence projects included helping ranchers prevent livestock losses to wolves through a variety of means—from employing range riders to installing fladry and other tools that keep wolves away. We also helped landowners coexist with beaver on their property by installing devices to prevent beaver-caused flooding and tree damage. We provided several hundred cans of bear spray to tribal and state wildlife managers to hand out to people recreating in grizzly bear habitat, and helped landowners near Yellowstone National Park coexist with roaming wild bison by fencing landscaping prone to bison damage (bringing our total number of projects since 2011 to 51). And we helped campground managers and waste hauling companies convert to bear-resistant dumpsters and food storage containers to keep bears away.

In addition to technical, logistical and physical assistance, we usually contribute 50% of the costs for materials for our incentive projects, ranging from less than $100 to several thousand dollars per project. (And we can only do this work thanks to our many members and supporters—thank you!) We also share coexistence techniques through additional outreach events each year. In 2020, we held or participated in 11 such outreach events in person, before COVID-19 restrictions went into place, and virtually over the rest of the year, reaching several hundred additional people.

Our efforts to restore imperiled wildlife to more places across the Rocky Mountains and Great Plains also saw tremendous gains in 2020. One of our greatest successes was our work collaborating with the Rocky Mountain Wolf Action Fund to create and pass a ballot initiative to reintroduce wolves to Colorado. Defenders provided significant funding and staff time to draft the initiative, gather the signatures required to place the initiative on the ballot and promote the initiative to voters across the state. Voters approved this measure in November, marking the first time ever that voters have directed wildlife officials to reintroduce a species to their state! Colorado officials will now move forward with wolf reintroduction by the end of 2023 and have already begun the planning process. Once implemented, this will be the most significant advance in wolf restoration since wolf reintroduction to Yellowstone and central Idaho 25 years ago, and will help complete wolf restoration across the entire Rocky Mountain range, an accomplishment of global significance! 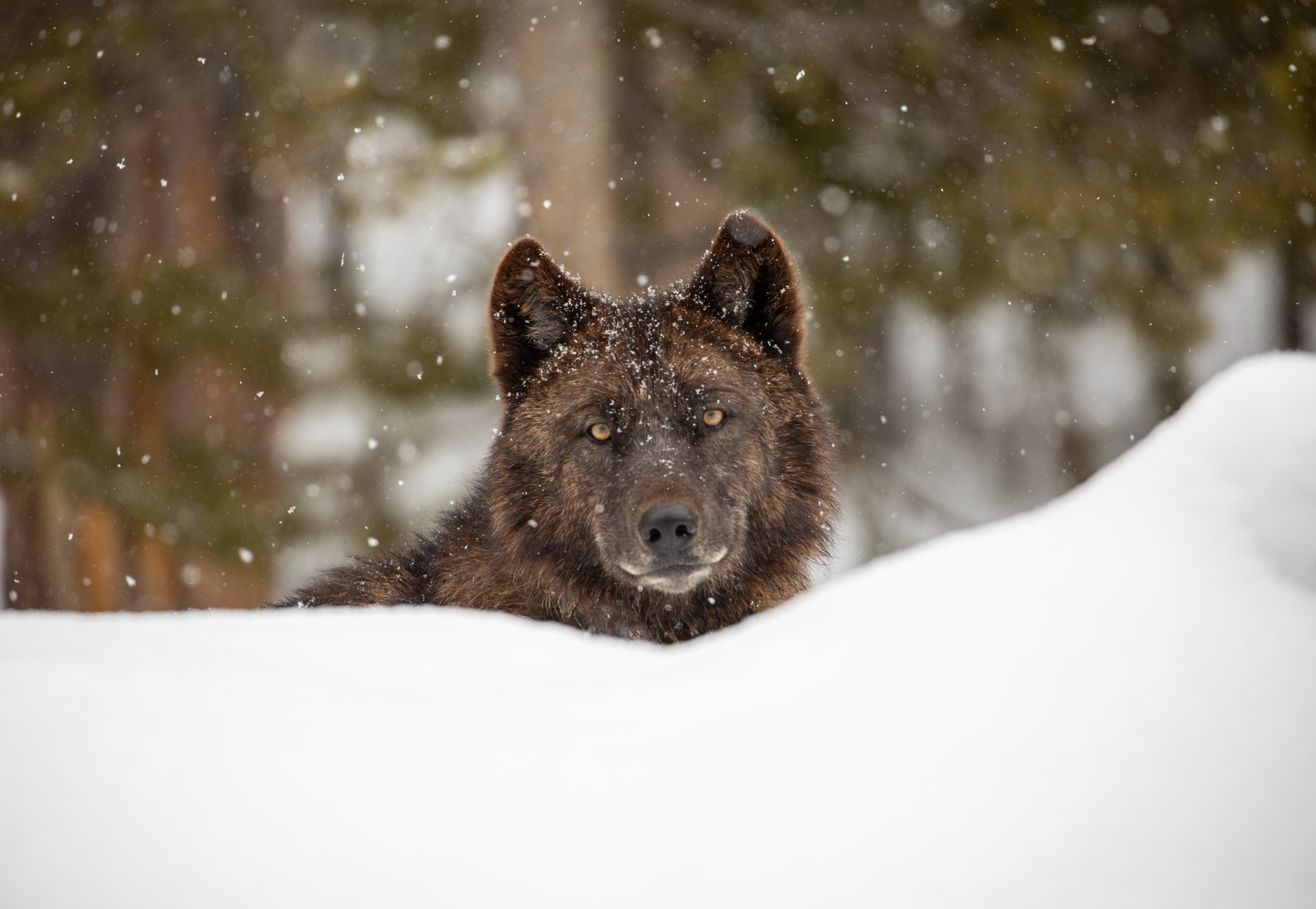 Defenders also continued our collaboration with the Assiniboine and Sioux tribes of Fort Peck Reservation and the InterTribal Buffalo Council (ITBC) to restore genetically important wild Yellowstone bison to tribal lands. Defenders coordinated and paid to relocate an additional 44 bison from Yellowstone to Fort Peck this year. In addition, 2020 marked the beginning of relocations from Fort Peck’s growing herd to tribes throughout the country under the leadership of ITBC. Without Fort Peck’s willingness to receive Yellowstone bison, the bison would have been shipped to needless slaughter because of a 20-year-old legal settlement requiring the National Park Service to keep Yellowstone’s bison population below certain thresholds. Instead of shipment to slaughter, we are witnessing the return of bison to tribal lands across their historical range. 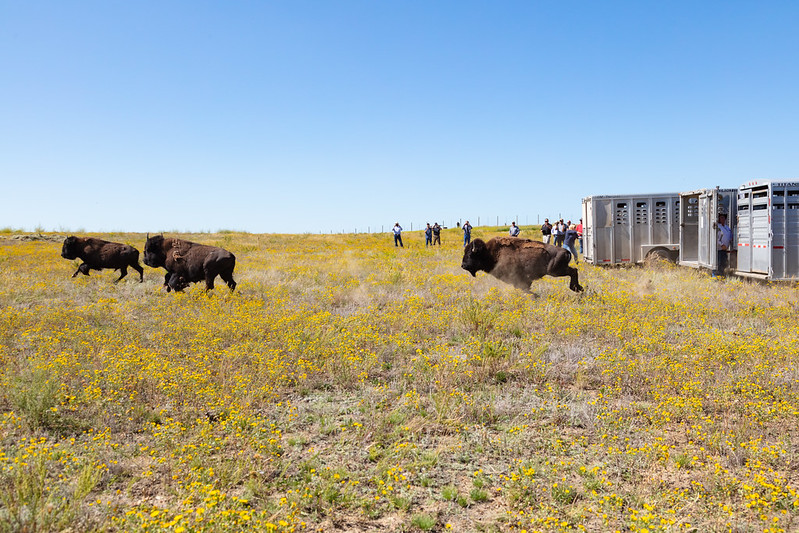 We also worked with our partners at the Southern Plains Land Trust (SPLT) in southeast Colorado to restore stream vegetation for future beaver restorations, to protect prairie dogs for future black-footed ferret reintroduction and to reintroduce 10 bison of Yellowstone lineage to begin another new conservation herd. This fully protected herd has great potential for expansion as SPLT continues its land acquisition, soon to be 43,000 acres in size. This new project brings bison restoration one step closer to our goal of at least 10 conservation herds of no fewer than 1,000 bison each across the species’ historical range. 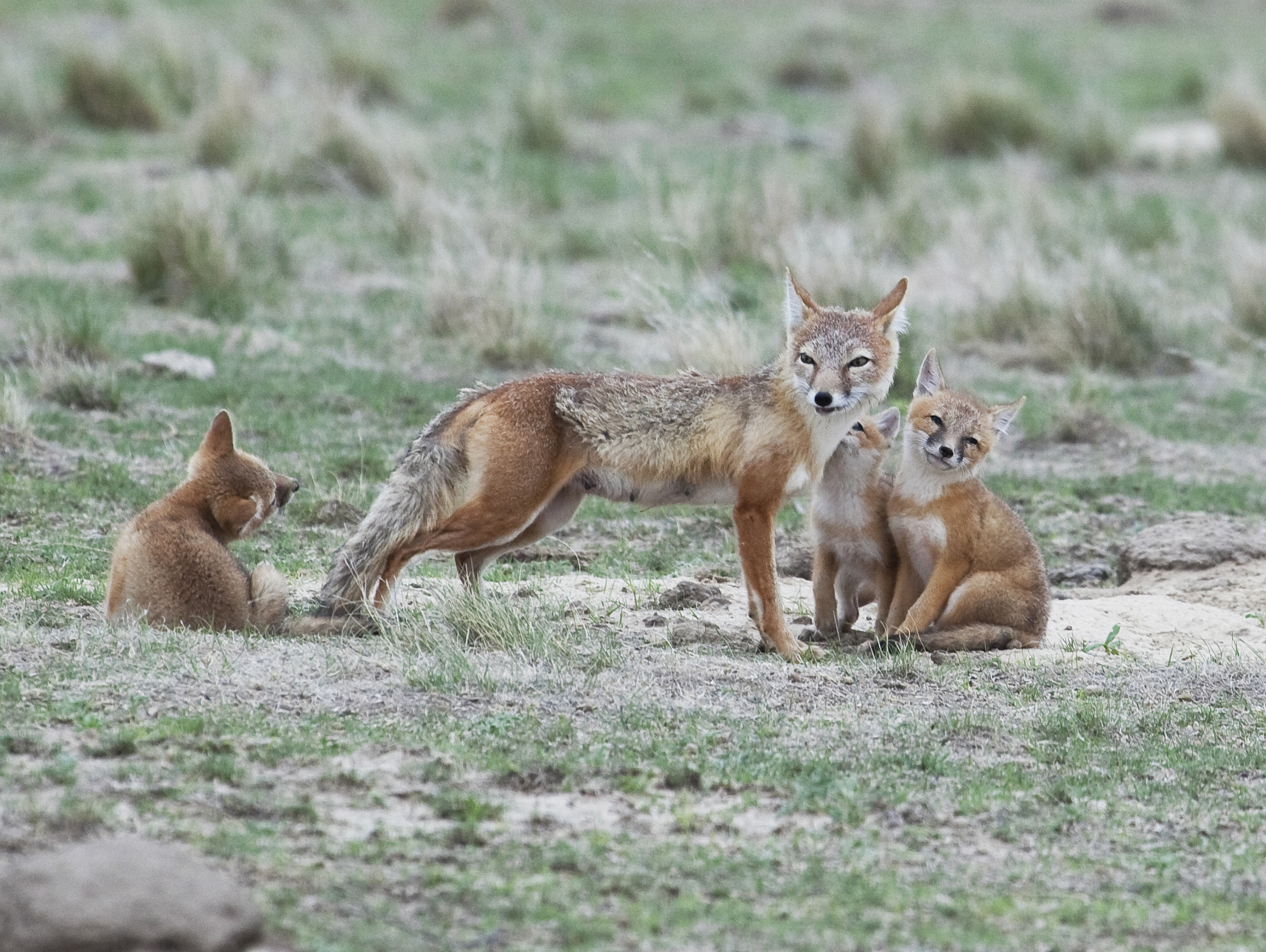 Partnering with the Fort Belknap Indian Community in northcentral Montana and Smithsonian Conservation Biology Institute, we assisted with a new five-year effort to reintroduce swift fox to Fort Belknap tribal lands. This housecat-size prairie fox was wiped out by trapping and poisoning across its northern Great Plains range but has been restored to a portion of this area through reintroductions. This new effort is the latest step in recovering the species across the region. Most of this important work is because of the efforts of several northern Plains tribal communities, beginning with the Blackfeet Nation which initiated the first swift fox reintroduction in the U.S. in 1999, also in partnership with Defenders. 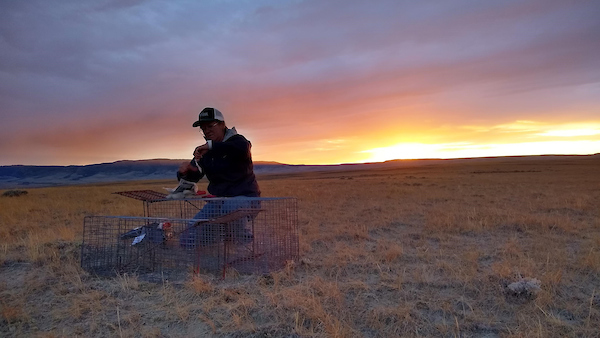 Monitoring and Advocating for Wildlife

Finally, our Rockies and Plains team helped monitor and advocate for wildlife across the region. One example was our wolverine watchers program in the Bitterroot and Sapphire Mountains of western Montana. In our sixth year of this program, we organized more than 60 volunteers to set and monitor 12 camera trap/hair snare stations. COVID-19 ended the program early, but we still managed to collect data on five wolverines, helping managers protect the habitat of this imperiled and secretive carnivore. 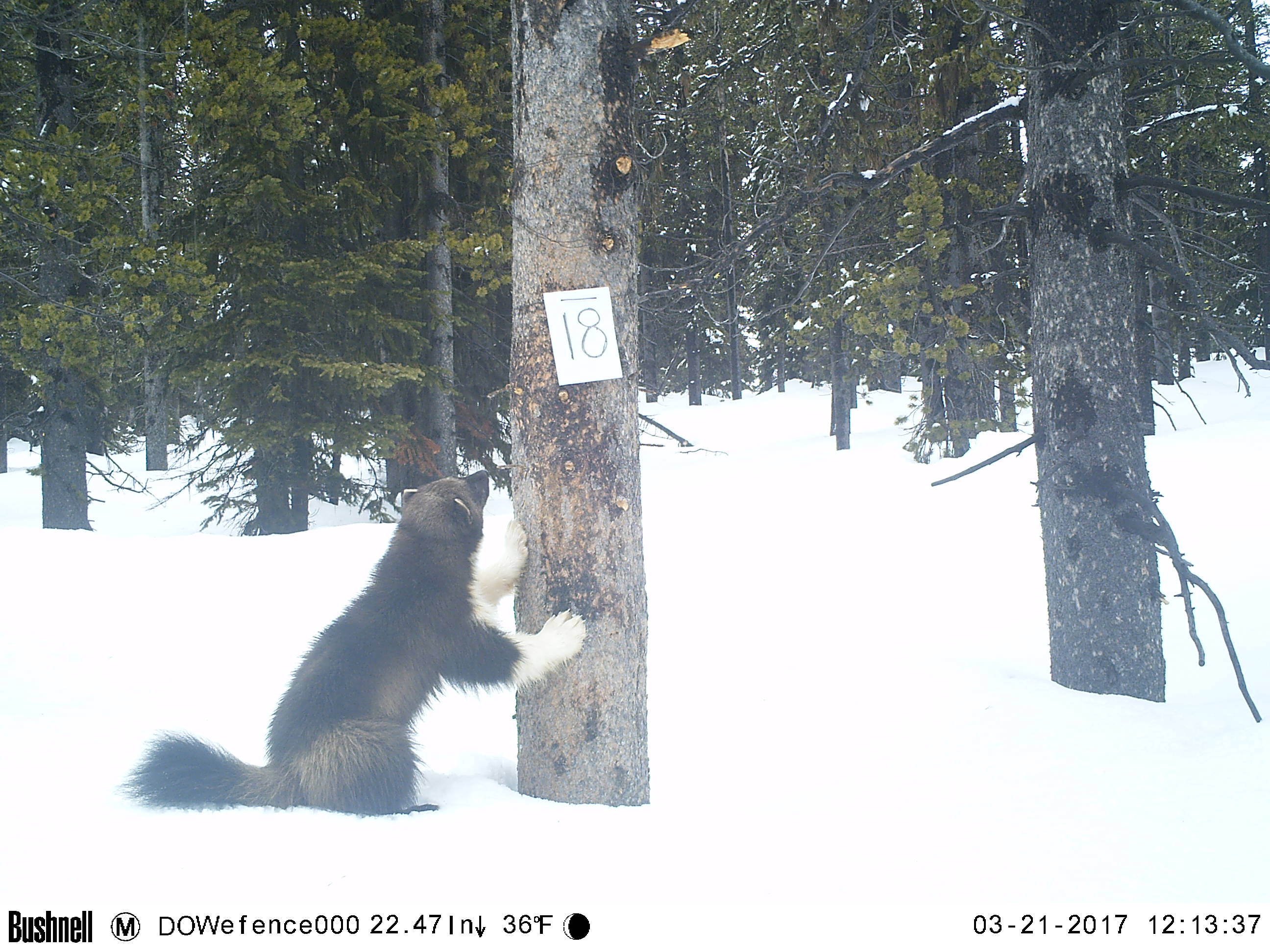 2020 also marked the first confirmation of a group of wolves in Colorado in more than 75 years. Small in number, this pack remains at tremendous risk of human harm. Defenders set up multiple remote cameras in the region to collect data on this pack’s location and movements, and staff spent significant time learning the landscape and speaking with local residents to begin building relationships. We succeeded in capturing images of wolves, which led to a press release from Colorado officials reminding the public that these wolves are fully protected with severe consequences for harming them. We continue to monitor this pack to protect it until additional wolves are reintroduced to Colorado. 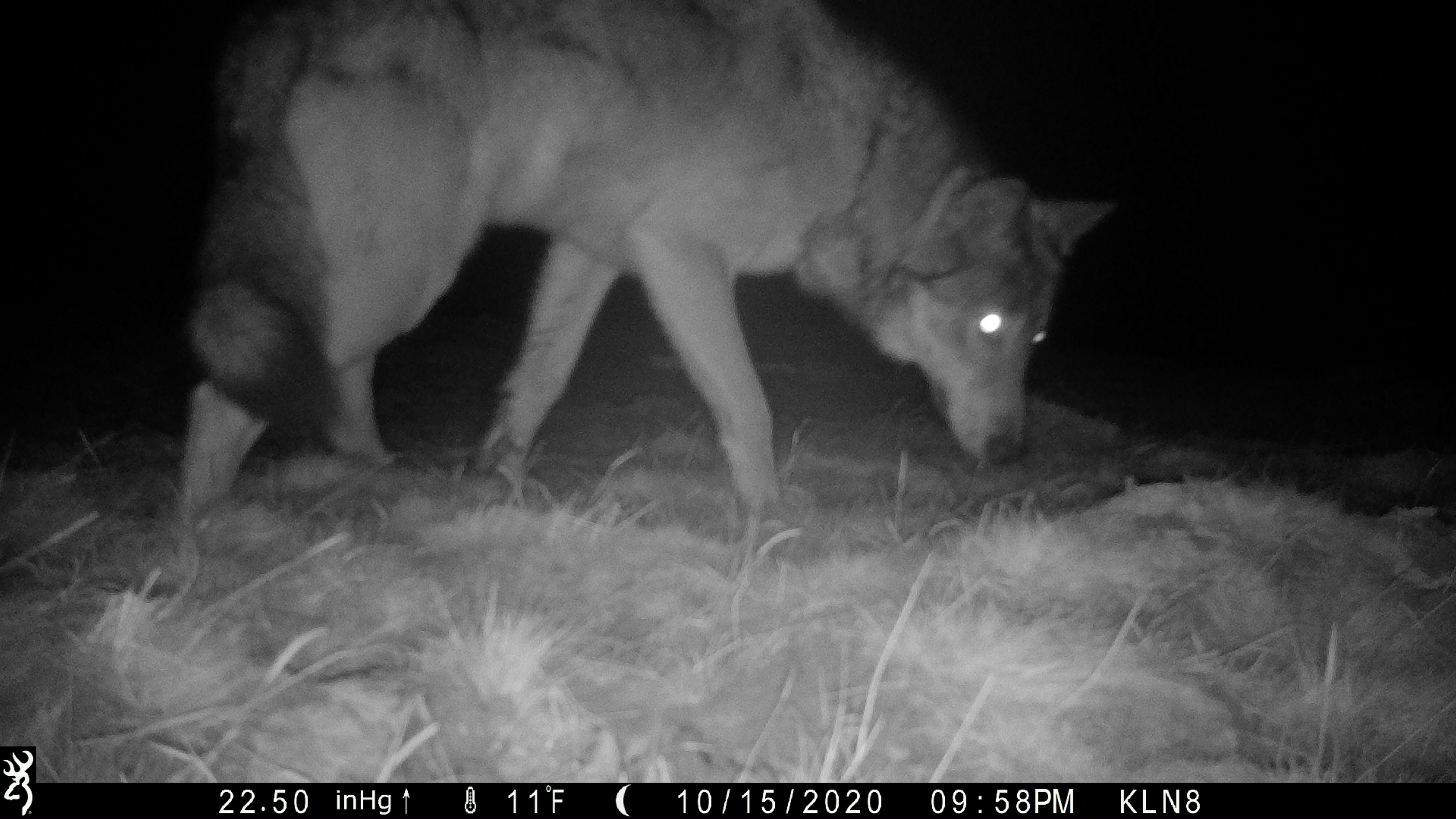 Though wildlife made tremendous gains throughout the region in 2020, we also saw a few heartbreaking setbacks. Two are worth noting. The U.S. Fish and Wildlife Service removed the wolverine from consideration for protection under the Endangered Species Act, despite only about 300 persisting in the lower 48 states, mostly in the Northern Rockies. We sued the agency over this decision and will not give up on our 20-year effort to protect this species. 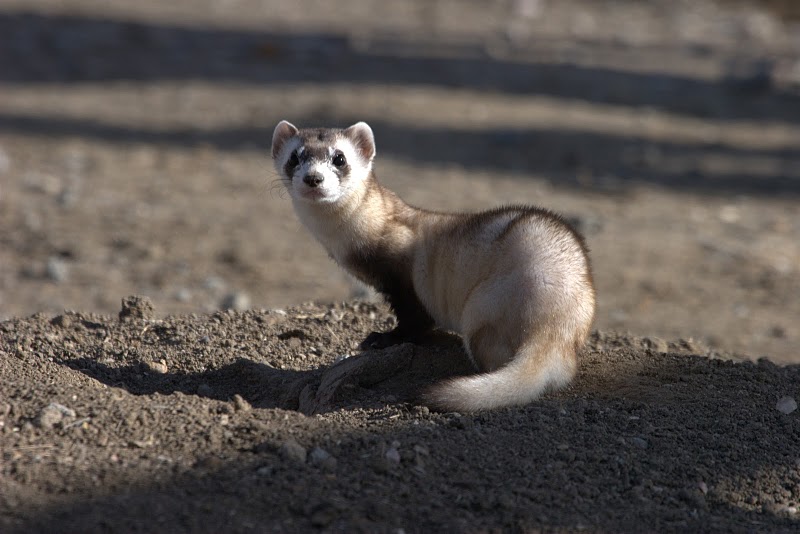 Our many years of work to restore and protect prairie dog colonies in Thunder Basin National Grassland in Wyoming (including past relocation of hundreds of prairie dogs from areas slated for poisoning to protected areas) were essentially erased by a politically forced plan amendment process that eliminated hard-won protections. Prairie dog poisoning and shooting is now allowed in the only area of the grassland where these activities were largely prohibited. This was done for a small number of ranchers who graze cattle on this public land and do not want to share the land with prairie dogs. These changes prevent any chance of successfully restoring the endangered black-footed ferret to this area – one of the only places with enough prairie dog colonies to help recover the ferret and prevent its extinction. (Ferrets can only survive in large prairie dog colonies.) This decision will be difficult to reverse, but we will continue to explore possibilities.

Our Rockies and Plains team looks forward to working with our many partners throughout the region to continue to make gains for imperiled wildlife in 2021. We will also strive to make new and diverse partnerships, and we are hopeful for new possibilities for wildlife and people under the Biden administration, including reversal of harmful Trump administration decisions. Though we don’t know what 2021 will bring, we do know that we will continue the fight against the human-caused extinction crisis by protecting and restoring wildlife and wild places with all who care for them. 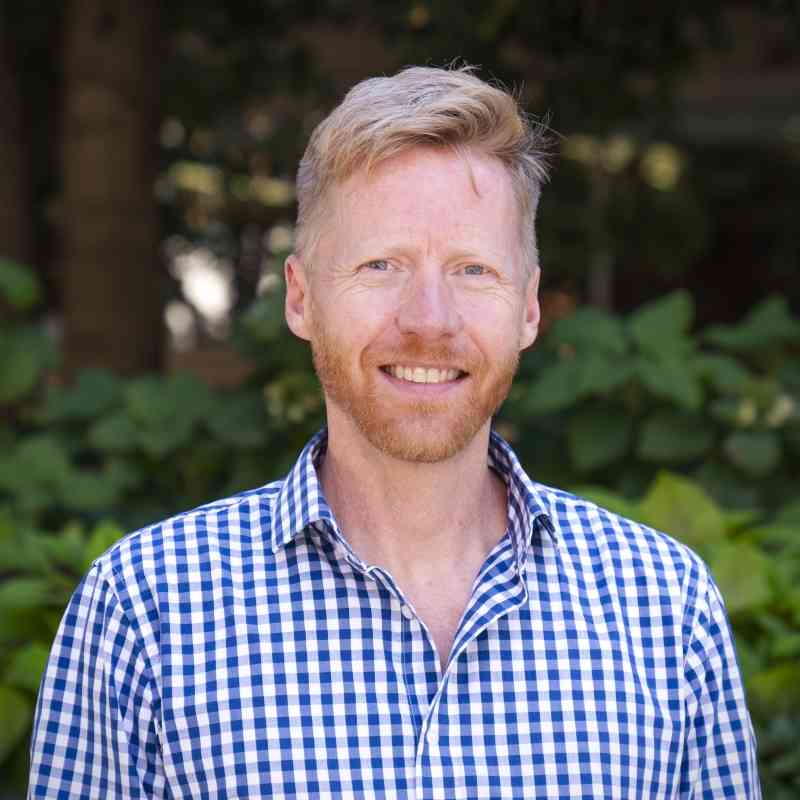 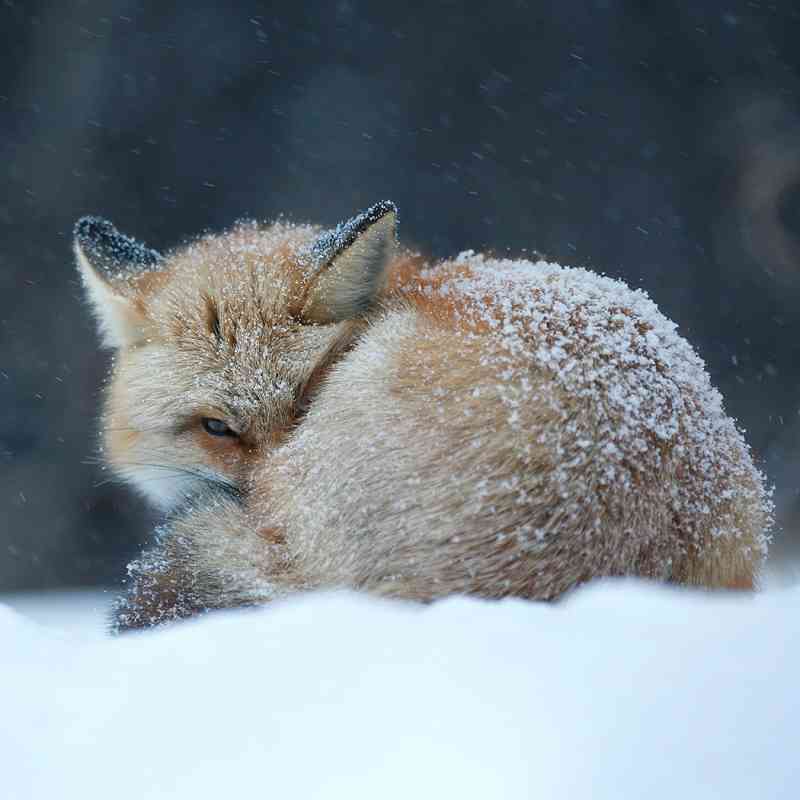